Reasons to Take a Chance on a Bad Horror!

(Question on Quora: Would You Rather Watch a Really Bad Movie or An Average one?)

A really bad one!

So bad that 5 minutes in, we’re pretty sure we won’t make it to the end. But then continue to watch because we can’t imagine how such a creation might end and now, I’m intrigued. I’m never as curious as this watching the average flick.

Average is average and frankly, done to death. The movie maker stayed safe and within the typical formula and it’s a formula we all know very well. And the job of a film is to be entertaining and at this point, average can safely be assumed as boring. I don’t want to watch a movie and be bored. I want to be entertained!

Just a note, I am not a continuity counter, in general, I’m very forgiving in that aspect. I don’t get upset because someone’s hair is different from scene to scene or an ancient Roman is wearing a toga and a Timex. But that’s all part of the fun of a really bad movie!

Is the monster in that old movie being help by a string? Why yes it is!! Is that monster a squid? Why does it sound like a man saying,”Rawr, rawr.” over and over? Calm me crazy but I do assume that squids are not swimming through the ocean, roaring. But if they are, I really need to be watching National Geographic or something by Jacque Cousteau! 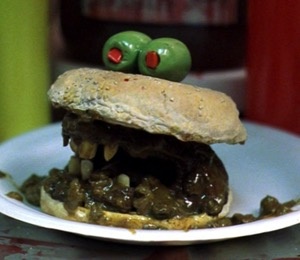 Still from Poultrygeist: Night of the Chicken Dead. Review here!

And that never happens with the average movie, most of which are a one and done watch. But a ridiculously bad movie could merit a whole festive evening of food and friends, while we all marvel at the savage terribleness of a truly bad film. A weekend of me watching my sisters, watch a wretched wreck of a movie is comedy that lasts a life time.

I’ve bonded with people over a trash fest. I’ve never bonded with someone over an average movie. Average is generally safe. And needs to be safe to be commercial. Which is fine, I’m fond of many a commercial flick. But safe gets boring and leads to more risky movie watching to escape the boredom.

Finally, I can always appreciate the risks taken in a bad movie, unless it’s considered bad because no risks were taken, no matter how ill advised or hair brained. The risks are where magic can happen. The risks are how terrible movies can become cult classics because the awfulness is beloved by fans and so, not considered awful at all. Because in the end it’s still art and art speaks to us. It’s not supposed to be safe.